Home / Articles / How the robot-android from Promobot can shake hand

Terminator removes the skin from his limb showing the metallic skeleton. The scene from the popular film makes an emotional shock for even those who have never watched this film. Behind the action of the moment, no one can see the main thing: the mechanical limb is a little adapted to the real actions. It is likely to be rather short-lived. Of course, it can be glanced only by such specialists, like Andrei Vaskov, an industrial designer of the “Promobot” company. Below he will tell us, how the development of the arms for the Russian androids happens.

In 2019, the “Promobot” company represented its own first robot-partner, named Aleks, on the robotic forum in Skolkovo. This robotic system of a new Robo-C series had an eloquent appearance, clearly demonstrating both its advantages and disadvantages. Without any doubt, among the last category, limbs were on the first place. 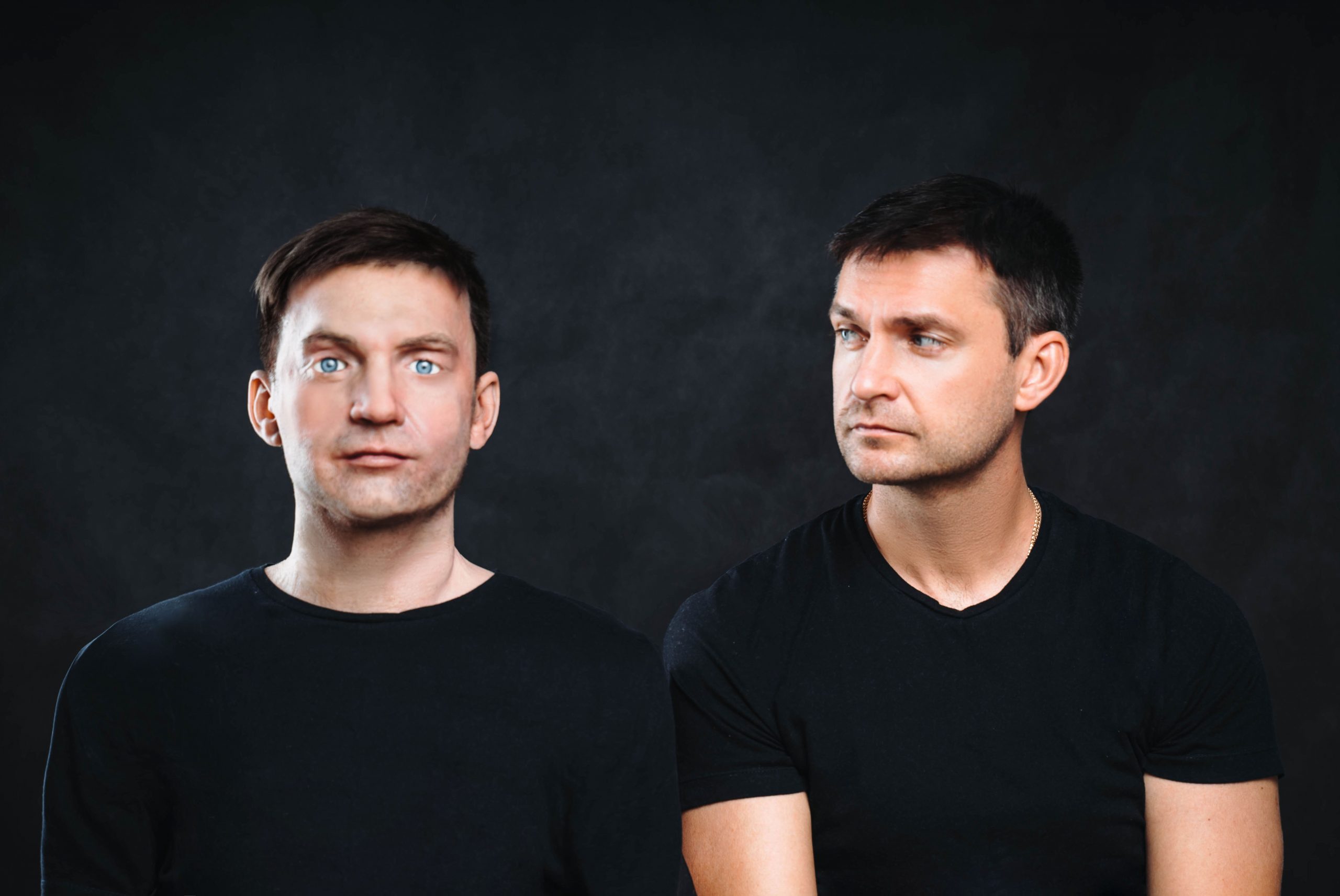 Where does it come from?

Robo-C represents the anthropomorphic body, capable of interacting with a human. It is not complicated to imagine the interaction: robot can speak without assistance and respond to the words of a partner. But in the real-life communication, non-verbal ways of interaction, gestures and touches also play a significant role. In order to increase anthropomorphism and improve the perception of the robot image as a living partner, we had to equip the construction with functional manipulators. In other words, the task was to make a robot with human hands.

Having constantly an example in the mind, the Promobot team of engineers formulated a list of functions, parameters, and constraints for the manipulator. We decided to make the limb as a self-supporting active structure in a housing made of aluminum, polymeric materials, ABS and ABS-like plastics, silicone and polyurethane. The future development was divided into 5 blocks: shoulder, forearm, elbow, wrist and hand. Each part must meet its own kinematics requirements. For example, the shoulder must rotate with an angle of up to 90 degrees with respect to the normal. 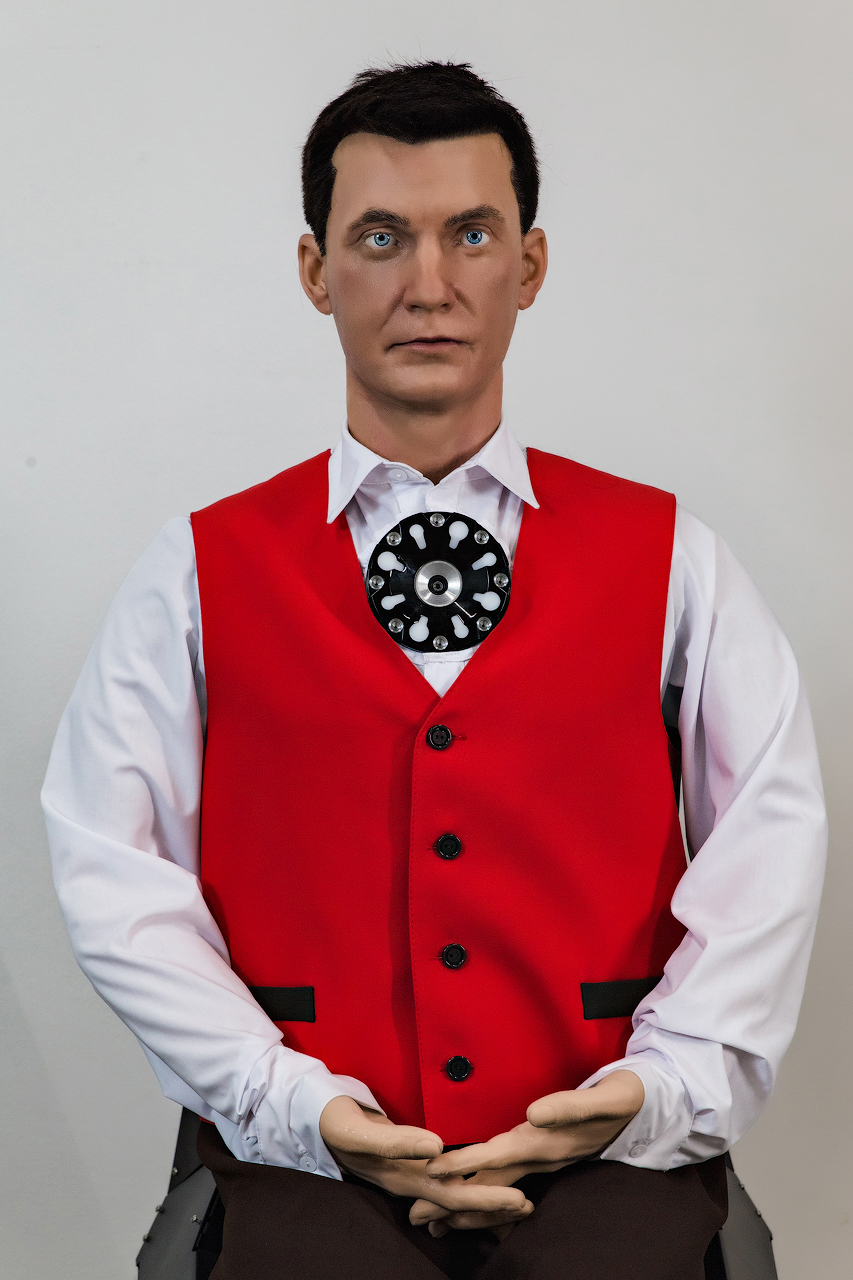 At this stage, we have not paid much attention to the fine motor skills. So, the development plan supposed the independent bending of a big thumb only. That is why we decided to make the other fingers mobile, but co-dependent. 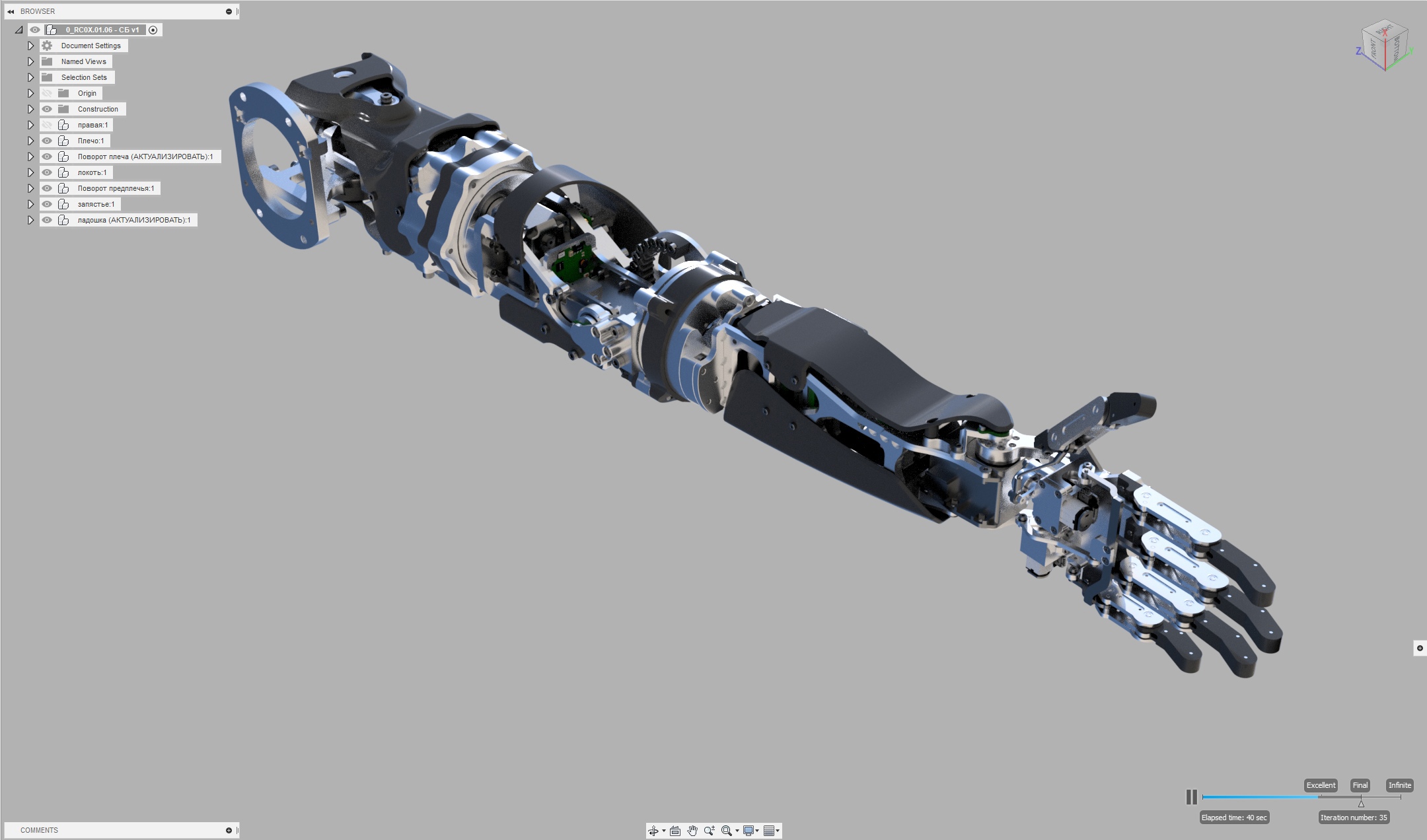 Apart from the technical requirements, there is a list of subjective requirements. The whole team of the company, including marketers, psychologists and designers, took part in its formation. For example, the specialists asked to perform the development in such a way that the work of the construction was not accompanied by a noise. The backlashes in the joints were decreased to avoid the tremor effect. Indeed, an android with Parkinson’s disease is unlikely to be to the user’s taste.

Acting according to the shaped plan, we created a manipulator prototype based on two constructions: a differential as the driving element of the shoulder and elbow, and the direct rope transmissions as the driving elements of the wrist and hand. It was a spectacular, but very complex solution, requiring a large number of non-standard products as part of the functional units. But a large number of unique parts is only a half of the trouble. The main problem was the impossibility of disassembling the individual mechanical subassemblies, making it almost impossible to repair the structure. In order to replace one part, the entire manipulator would have to be disassembled. In future, when robots repair other ones, it will not be a problem anymore. But today, a basic user must not have any problems connected with the custom repair service. 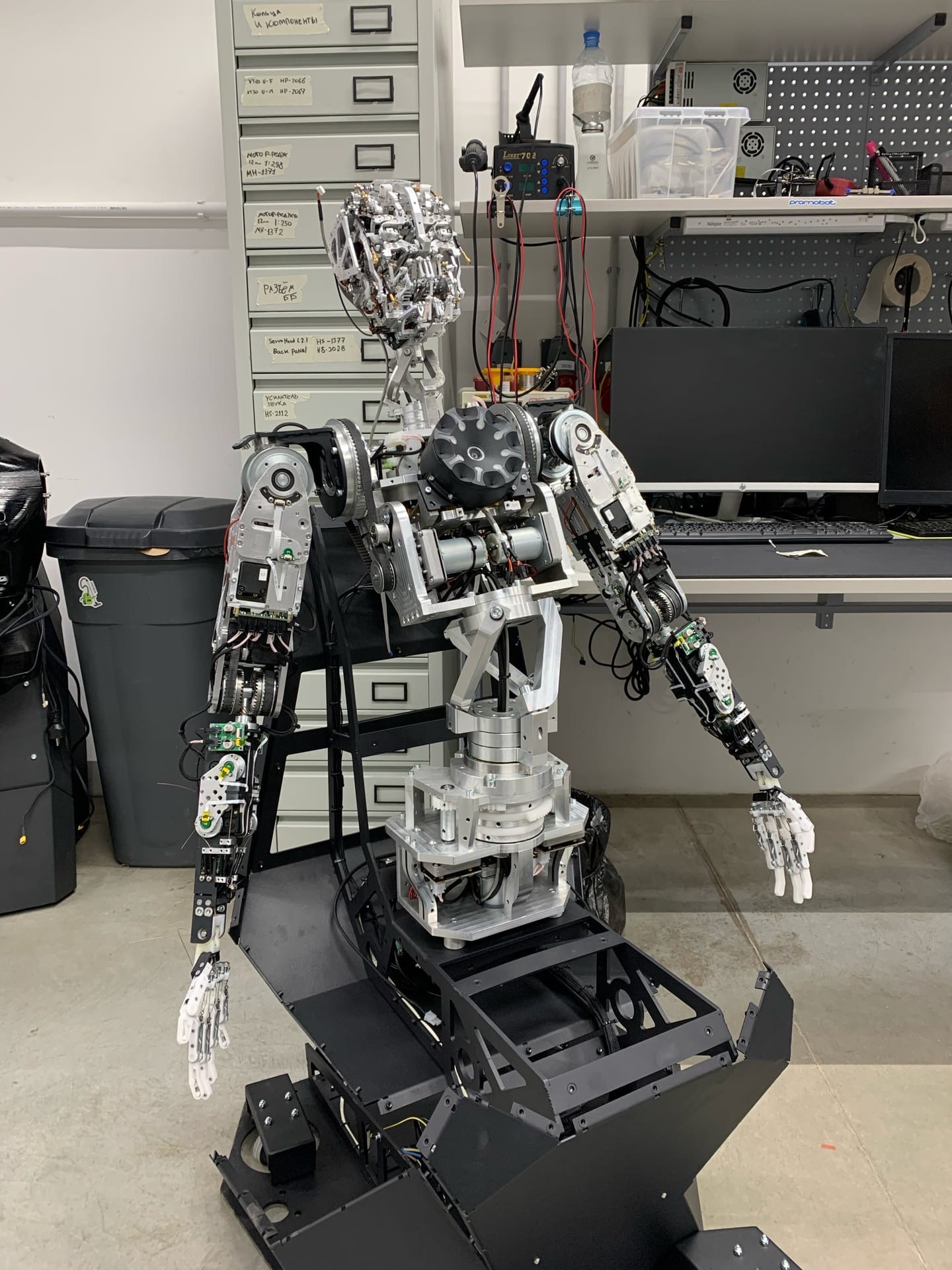 The prototype treated the structural parts as if they were simple consumables. What looked reliable in the drawings, plans, and diagrams, in practice, it turned out to be subject to increased risks and stress. Contrary to the calculations, the steel rope and roller system were under increased stress. Due to the wear and tear on the cables, the drive elements started to make uncontrollable movements. Because of these movements, the bevel gears began to wear out, and there also could be noticed the backlash formation in the constructions. We met many difficulties with the manipulator`s control. In order to just only move limb in 3 axes, a dozen of unscheduled defects had to be taken into account, for each of which required the individual set of sensors and analyzers to automate the processes.

A prototype turned out to be so rude that the largest period of construction operation without any failures or breakdowns was no more than 8 working hours, while the specification required about 3 000 hours. However, “crush-test” of a new limb fix some disadvantages to move to a new development iteration.

Nice to meet you, my robo-assistant!

In summer 2021, engineers completed the subsequent iteration of the manipulator`s development for android. We have elaborated almost all the constructive solutions for the robotic limb and introduced the additional requirements to the construction, driving elements, servo drives and sets of standard and non-standard parts allowable to use. 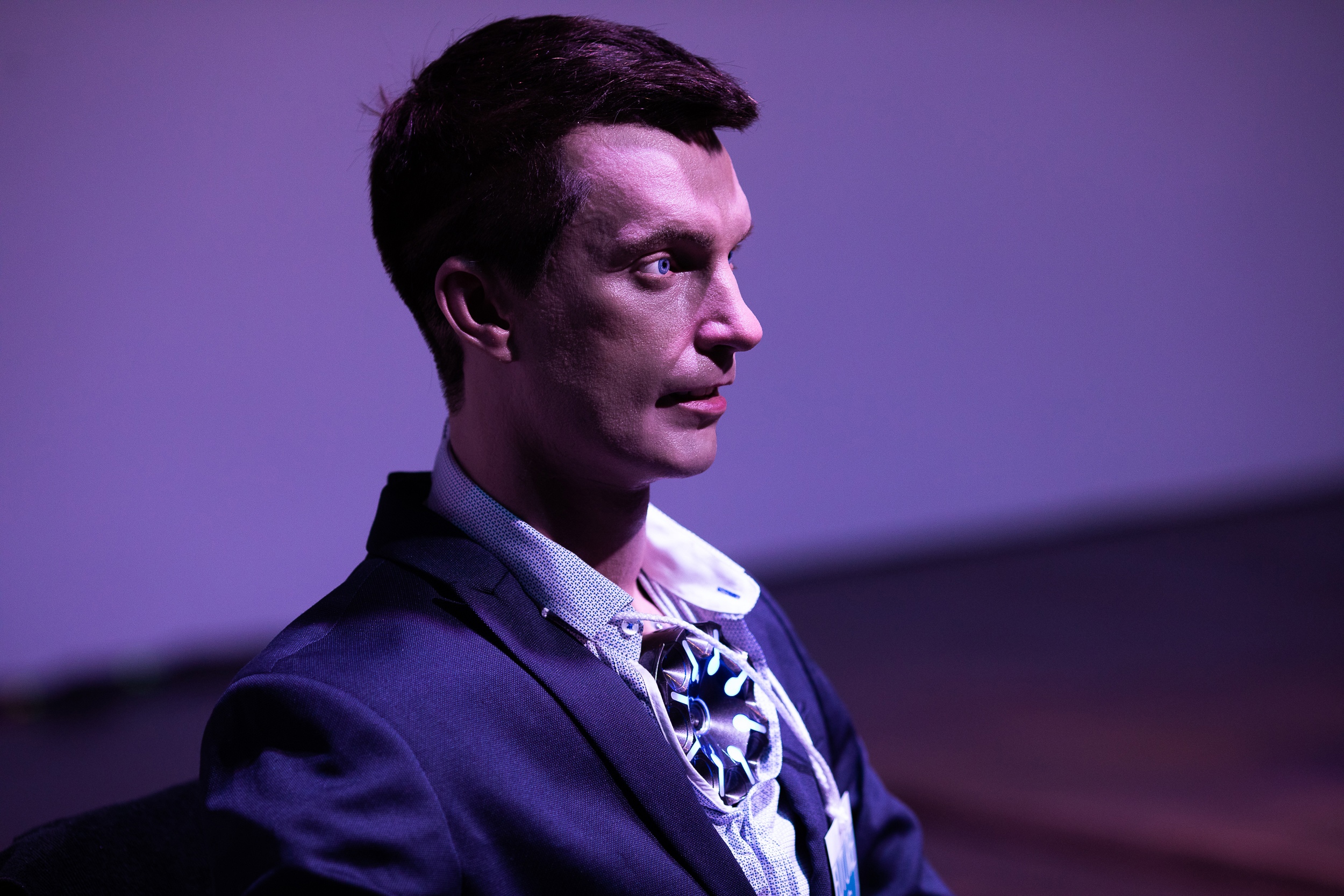 Today, the identical manipulator prototype can be compared to Alex`s limb in the same way as the human claw from Lego with a Terminator`s limb. We have changed motors, gear-motors, servo drives. In relation to the hardware solutions, we have elaborated the systems of dimensions and opportunities at a low level. We have also rewritten the software solutions and the control models. We have developed such thing which was initially mentioned in the specification.

What was a key to the success? Being a company worker, I can say that it is a teamwork. Trying to attract the engineers-specialists from other divisions and subdivisions, we got an opportunity to look at our robot-partner from a different perspective, get a feel for a role of a basic user and get on weight and test the construction before its readiness. As an engineer, I can add that the iterations have become the key to the success. We have not cut off the world by the calculations made on a paper. Again and again, we were developing a new and updated product, improving the established acquiring the latest one. Readiness for the endless iterations mainly distinguishes a successful team from the indifferent one.

Will we settle on this? The answer is supposed to be mentioned above. We continue to develop the manipulator, face, skin, an individually taken eye – everything that can be improved, because this is a true path of the robotics developer. By the way, iterations itself are not constant. Working upon the manipulator, we have got an experience which let us to decrease the working-out time for the next construction iteration from 10 to 4 working weeks. Current result of such activities let us to use the manipulator in any other model range of our robots if necessary.

Andrei Vaskov – the industrial designer of a Promobot company